LEGACY DOMINANT IN SWEEP OF MESQUITE 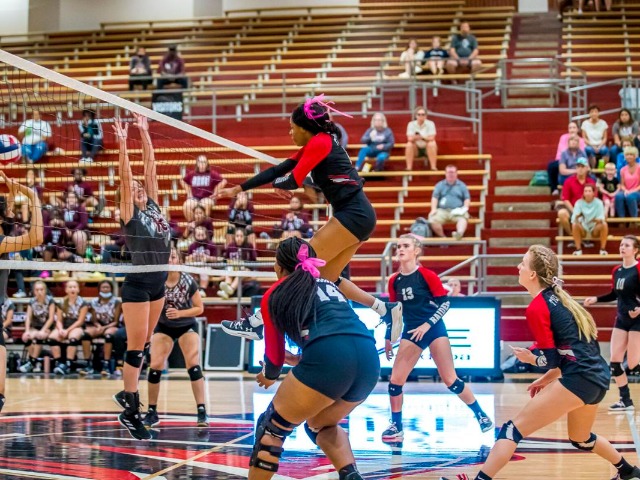 In volleyball, the goal is to keep your opponent from getting to 25 points … in a set.

The Tyler Legacy Lady Raiders attempted to keep Mesquite from reaching 25 points in the entire match.

“This was a good game for us,” Legacy head volleyball coach Bryan Winegeart said. “What I wanted to see from the girls tonight was consistency and running our offense no matter what was going on on the other side of the net. I definitely think the girls were consistent, and we did what we wanted to do with the ball tonight.”

With the score at 14-5, the Lady Raiders scored eight straight points behind the serving of Kelly Casel.

After Mesquite cut the score to 22-6, Legacy got a kill from Kinch on an assist by Avery Armstrong, and Kinch then served two straight points to close the 25-6 victory.

Mesquite opened the second set with a 3-0 lead, but Legacy responded with eight straight points and a 16-2 run. With the score at 20-11, Legacy went on a 5-1 run, closing the set with a kill from Taliyah Mumphrey on an assist by Wise.

Legacy opened the third set with a 6-0 run with Casel’s serving and multiple kills by Mumphrey. After Mesquite cut the score to 8-5, Legacy went on a 16-1 run, scoring 11 straight at one point, making the score 24-6.

It was “Pink Out” night for the Lady Raiders.

Jones had 10 kills. Mallory Thedford and Kinch had six kills each. Mumphrey had 6 kills, Huntsberger 6 kills and Ahava Young 4 kills. Armstrong had 21 assists, and Wise had 15 assists. Kinch had 6 aces, and Casel had 4 aces. Anna Gates had 9 digs.